The fried chicken craze shows no sign of stopping and the latest to join the fray is an extension of RakiRaki Ramen & Tsukemen. 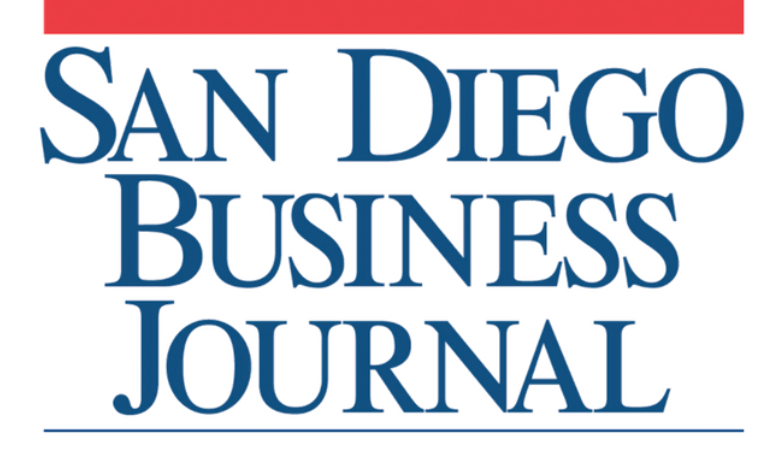 Junya Watanabe Learns the Tricks of the Trade

Out and About: Rakiraki Ramen 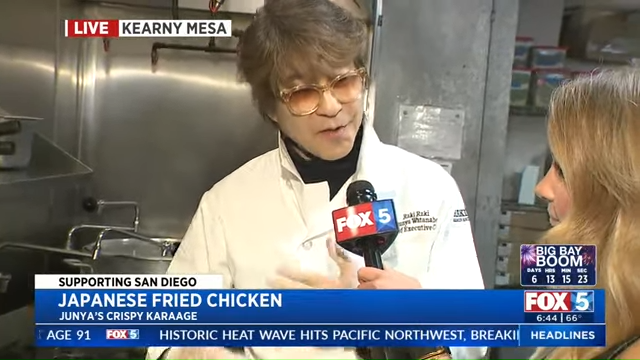 FOX 5’s Heather Lake has a look at Junya’s Crispy Karaage, or JCK, an offshoot of RakiRaki Ramen & Tsukemen.

If you are a fried chicken fan, you have probably had Japanese chicken karaage – juicy chunks of shoyu-based marinated chicken coated in starch and spices and double fried until they are wonderfully crispy. It’s the type of appetizer that is impossible to just take one bite and not want to devour the entire plate.  It’s so easy to understand why karaage is one of the most popular Japanese dishes, especially when it’s this tasty. 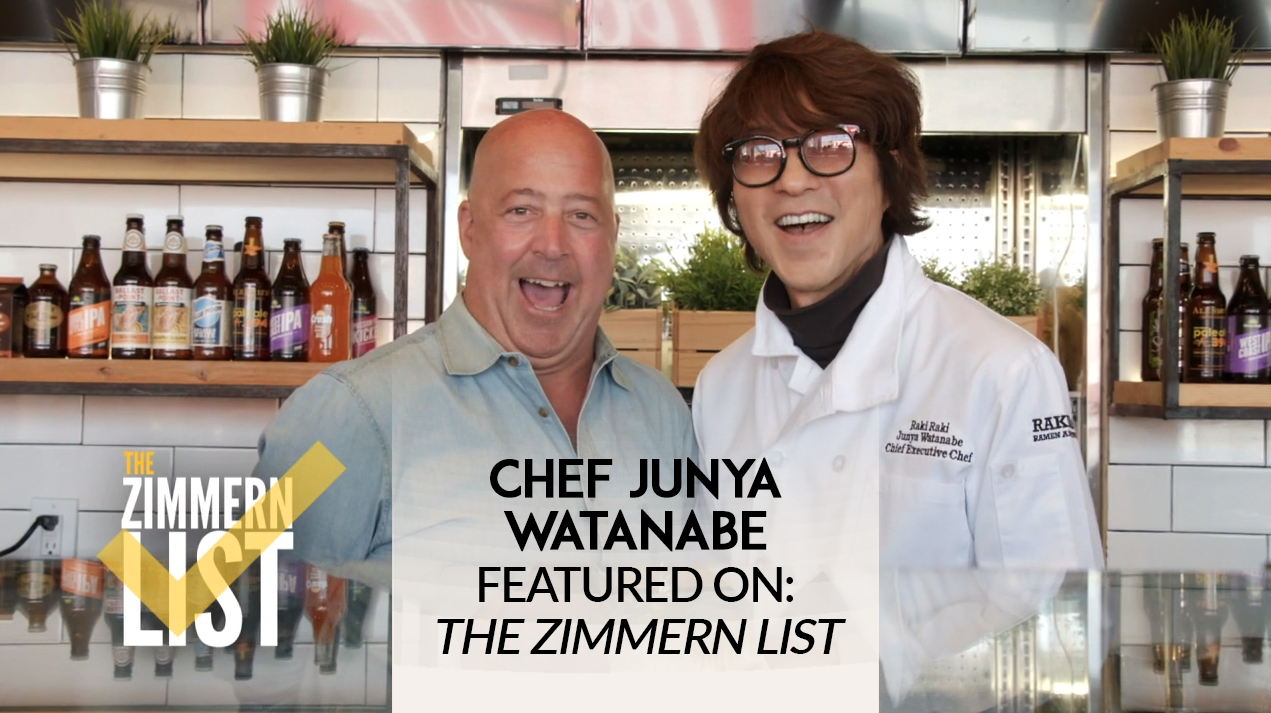 Andrew Zimmern is an American television personality, chef, food writer and teacher. He is the co-creator, host, and consulting producer of the Travel Channel series The Zimmern List, where he features two of Junya Watanabe’s creations: Rakiraki Ramen + Pokiritto. 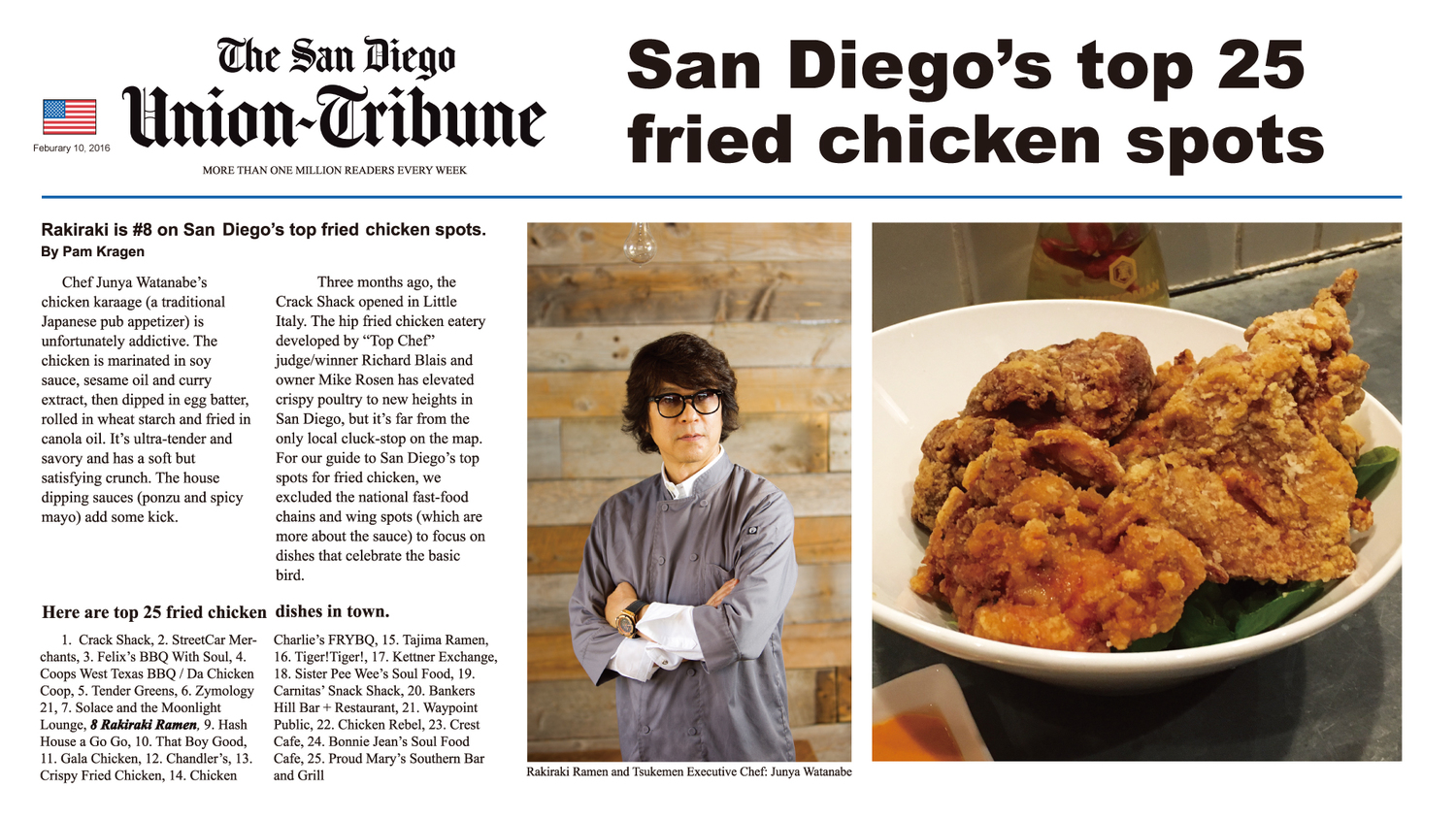 “Chef Junya Watanabe’s chicken karaage…it’s ultra-tender and savory, but has a soft and satisfying crunch.” 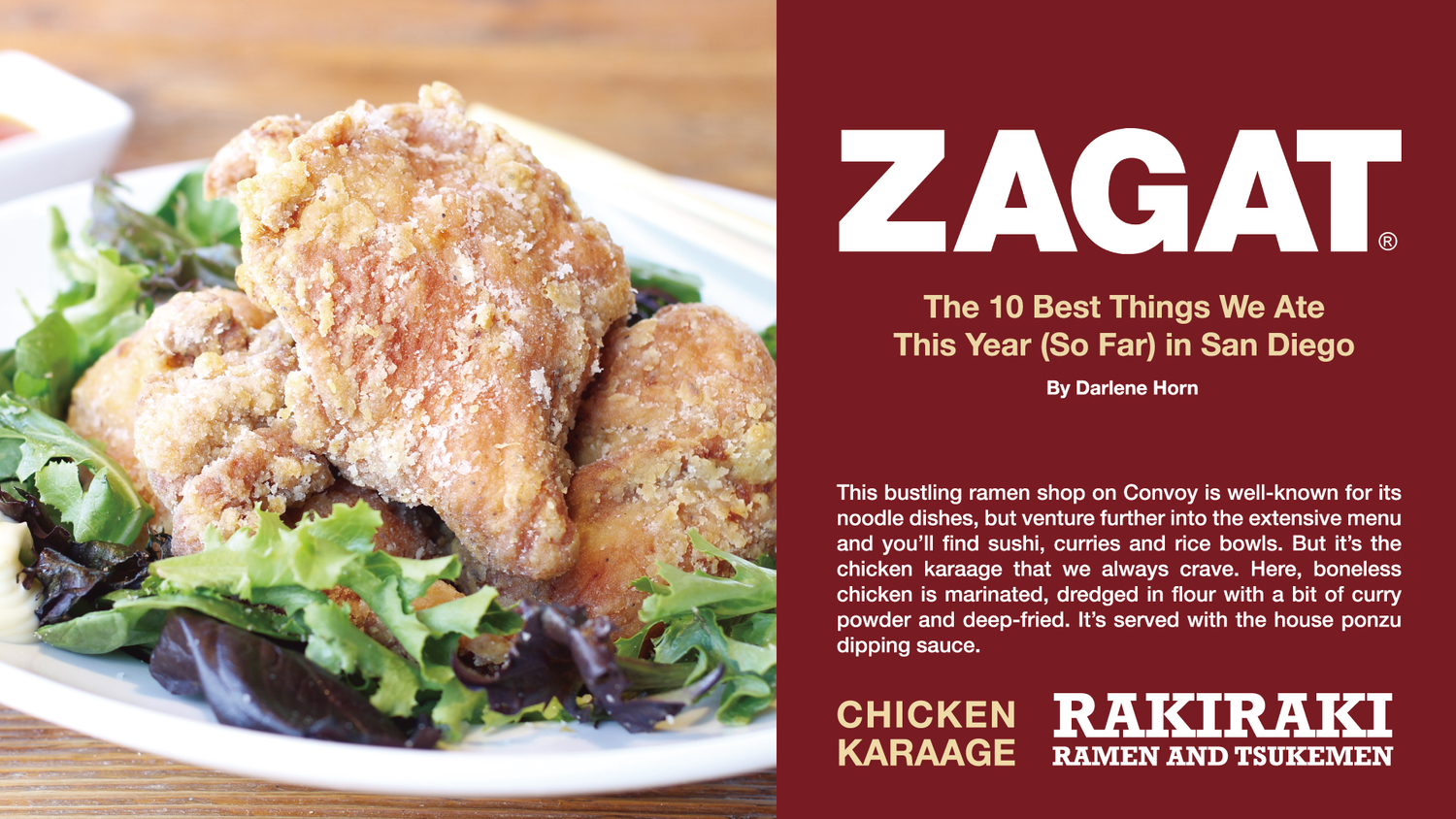 “…it’s the chicken karaage that we always crave. Here, boneless chicken is marinated, dredged in flour with a bit of curry powder and deep-fried.” 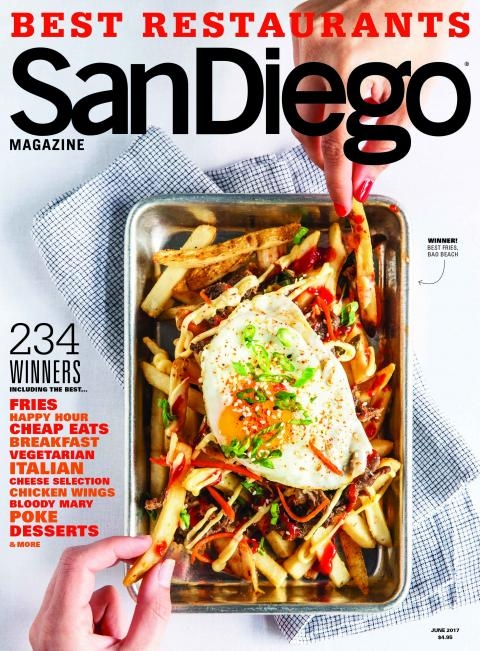 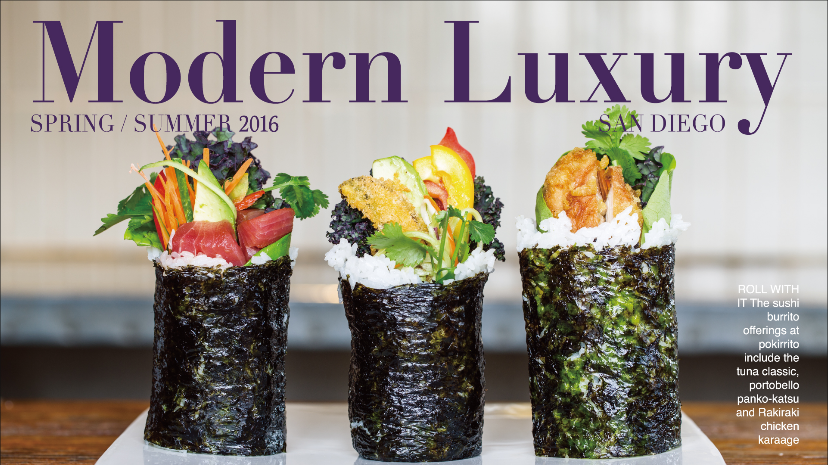 “A fashion entrepreneur ditches the runway for ramen, and we get the preview on his latest couture masterpiece: the sushi burrito.” 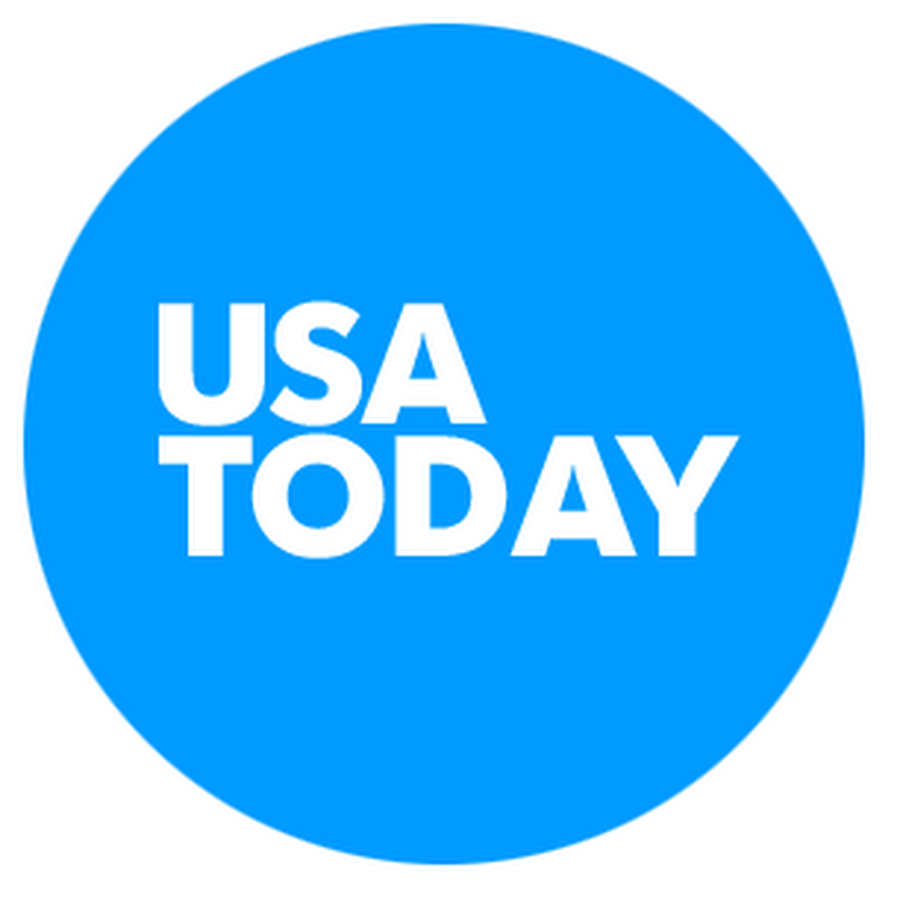 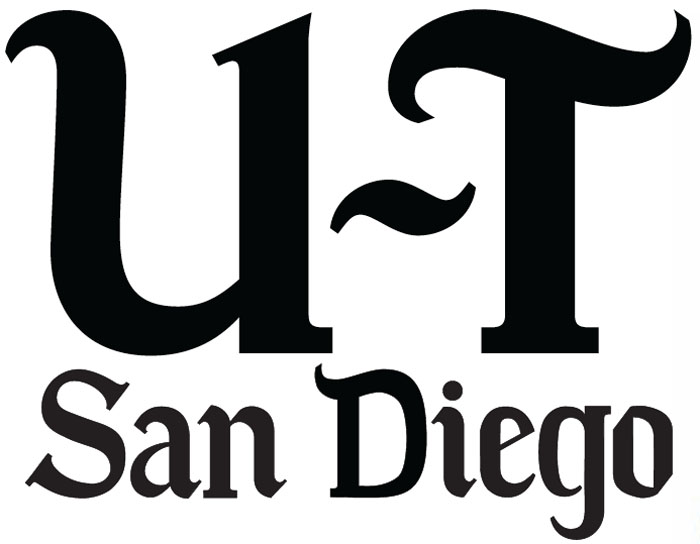 After announcing expansion plans and searching all year for another location, Rakiraki Ramen & Tsukemen has selected a new spot for their second San Diego restaurant.The popular ramen house, whose first eatery opened in Kearny Mesa in October 2012, will be one of the anchor tenants in the new mixed-use Olea Apartments building at the north end of Little Italy, just steps from Juniper & Ivy and Ballast Point Tasting Room & Kitchen. 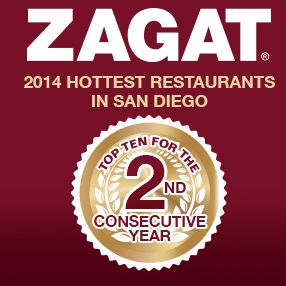 THE HOTTEST RESTAURANTS IN SAN DIEGO

Rakiraki Ramen & Tsukemen was chosen as one of the 10 Hottest Restaurants in San Diego by Zagat for the second consecutive year. Check it our to see why we’re HOT!

The space adjacent to Rakiraki Ramen & Tsukemen’s flagship location on Convoy Street, first home to Pokirrito and more recently The Yasai, a vegan sushi spot, has now expanded to offer Tokyo-style sushi under the name Matsuoka Pure Sushi. Conceived by owner Junya Watanabe and run by executive chef Hajime Matsuoka, it features a menu of traditional nigiri as well as a lesser-seen variation called temarizushi — small ball-shaped sushi that are usually prepared for parties and special occasions — topped with a selection of five to eight fish that will be available daily but could include halibut, fresh water eel, and sea urchin.

Matsuoka will also serve sushi rolls, from the classics to creative versions like the Shiokaze, which combines shrimp tempura, spicy bluefin tuna, snow crab, and crunchy eggplant, as well as bento boxes filled with nigiri, chirashi sushi, or multiple small courses modeled after a seasonal kaiseki meal. The sushi experience will be available from 11 a.m. to 3 p.m. and from 5 to 10 p.m. daily, but the space will otherwise continue to operate and offer the menus of The Yasai, RakiRaki, and JCK, Watanabe’s Japanese fried chicken brand.

HAPPY TO ANNOUNCE OUR PUBLICATION IN CITY CROWN MAGAZINE 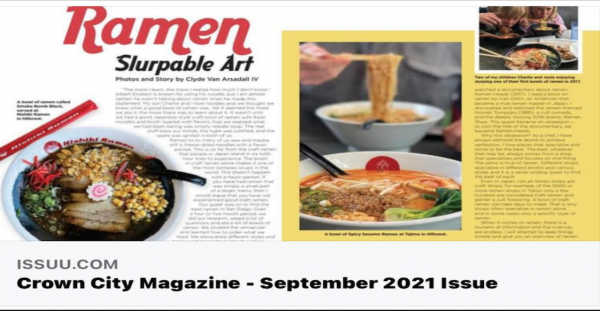 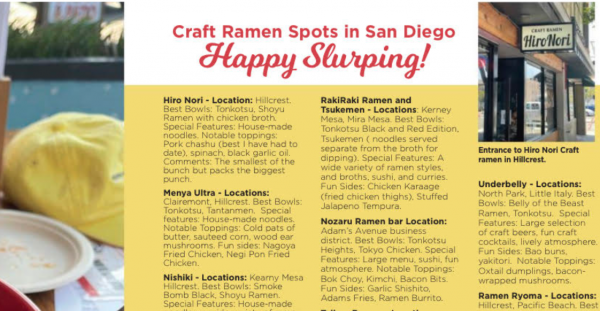 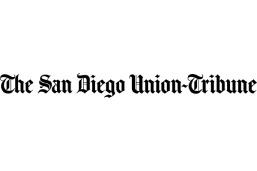 Fried chicken, the meal of choice for spring picnics, is popping up on multiple San Diego restaurant menus this month in sandwiches and other variations. Here’s the latest:

Junya’s Crispy Karaage: The latest culinary creation from RakiRaki Ramen owner/chef Junya Watanabe is his twist on the Japanese style of fried chicken known as karaage. Antibiotic-free chicken is marinated for 48 hours in fermented soy sauce and 12 spices, garlic and ginger, then coated with 22 spices, double-fried and served with house Japanese (kewpie) mayonnaise. The karaage is available in regular and spicy varieties in jumbo boxes, in sliders, with fries, in ramen or curry and in a bento box, priced from $11.40 to $25. The new JCK menu, introduced last week, is available at the RakiRaki location at 4646 Convoy St., Suite 102-A in Kearny Mesa. It’s also available for takeout. Visit rakirakiramen.com. 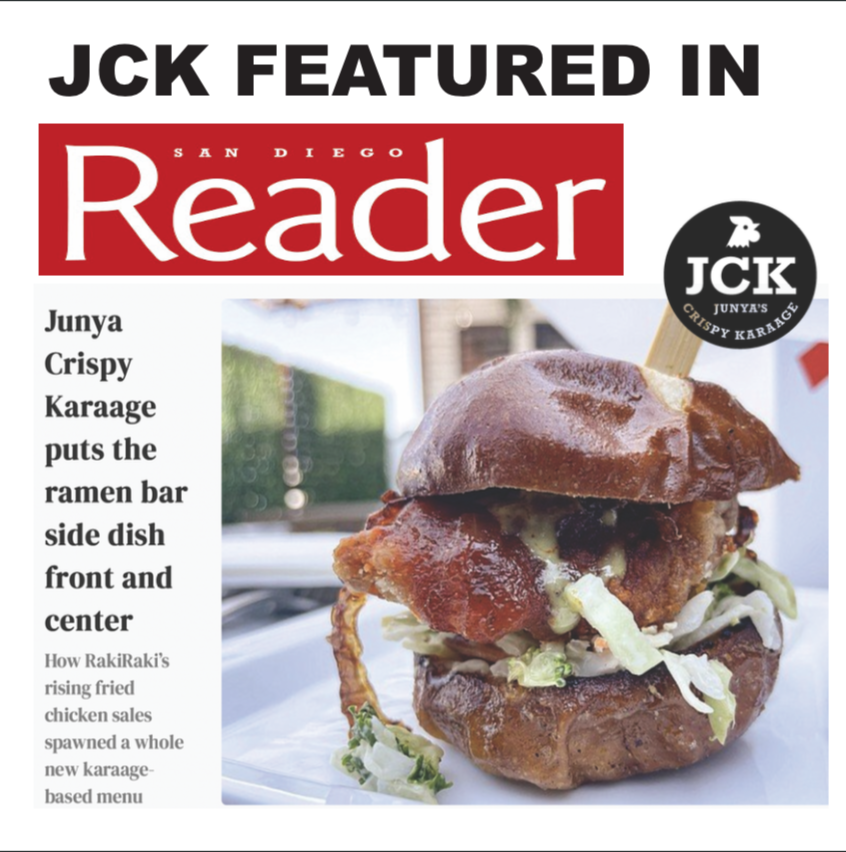 There’s a good reason I have been writing about fried chicken over and over in the past year: it’s become more popular than ever. And not only because Nashville hot chicken has been having a moment in San Diego. Nationwide, people have ordering fried chicken of all stripes, so often, you would almost think it had been hyped alongside hydroxychloroquine as a covid remedy.

Junya Watanabe witnessed it first-hand. The chef and founder of RakiRaki Ramen tells me that as take-out and delivery orders for his ramen business went up after the pandemic started, so too did orders for chicken karaage. Which his noodle restaurants offered almost incidentally, as a matter of form. In Japan, he says, this Japanese version of fried chicken is offered as an appetizer in just about every ramen bar.

However, after seeing the frequency of karaage orders on his ramen receipts, he decided it was time to redouble his focus, update the recipe, and spin off a whole new brand. The result is JCK: Junya’s Crispy Karaage.

Watanabe has a history of spinning off new concepts. Five years ago, he helped kick off the local sushi burrito craze with Pokirrito. Around the same time, he launched the j/wata Temaki Bar, which specialized in made-to-order sushi hand rolls. Early last year, he delved into vegan sushi with the launch of The Yasai.

Now, Junya’s Crispy Karaage has opened in the same Kearny Mesa location where he operates the original RakiRaki, and a Yasai counter. The interconnected restaurants, their dining rooms, and patios will all soon fall under the umbrella, RakiRaki Commons.

And yes, consider the karaage upgraded. As he did with his original ramen recipes, Watanabe consulted with chefs in his native Tokyo to learn the secrets of a proper karaage

JCK’s hormone- and antibiotic-free fried chicken is marinated overnight in shoyu and vinegar, coated with a blend of flour and seasoning that includes curry powder, and fried to an impressive crisp, without being greasy. Strips of it are served in a cardboard box printed in red and white colors that, like the JCK brand, nod to “finger licking good” Southern fried chicken fast-food chain currently known as KFC.

Fried chicken orders include dipping sauces, including spicy kewpie mayo to ponzu, and of course there’s a spicy option, coated in a sauce made with eight types of Japanese chili pepper. Other fried chicken options include sliders with sesame coleslaw, and a curry rice dish, featuring his Setagaya 27 curry — named for the famed curry district of Tokyo that inspired it, and the 27 spices responsible for its flavor.

Probably the most interesting karaage dish on the menu is a bowl of ramen, employing the fried chicken strips served over a bowl of RakiRaki chicken broth and thick, house-made noodles. If you’re looking for a good reason to revisit RakiRaki’s ramen, do it for those noodles, which are now made with a bit of mochi.

That would be the rice flour product responsible for gummy-like Japanese tea cakes and Mochinuts, the extra chewy donut shop that immediately drew long lines when it opened across from RakiRaki this spring. As you might expect, a little mochi lends a lot of elasticity to these thick ramen noodles, too. Which makes fried chicken ramen the rare all-in-one dish you can slurp, crunch, and chew. Kind of fitting for a location known to feature a collection of Japanese food trends under one roof.

RAKIRAKI FEATURED ON CBS8 OUT & ABOUT

We were recently featured on CBS8’s Out & About and Chef Junya Watanabe was excited to showcase some of the menu items. They featured our mochi-infused ramen process from beginning to end. We love teaching people about the process and care that goes into producing our main attraction.

Also, making a surprise appearance was our chicken karaage. It is marinated chicken deep-fried to perfection served with house ponzu dipping sauce and spicy Japanese mayo.

It is always a good time to come by and get ramen, chicken or anything else on our wonderful menu. If you’re hungry after watching that, you can order online.

View the full article at CBS8’s Out & About.